Using the Hierarchy of Hazard Control to Make Ergonomic Adjustments 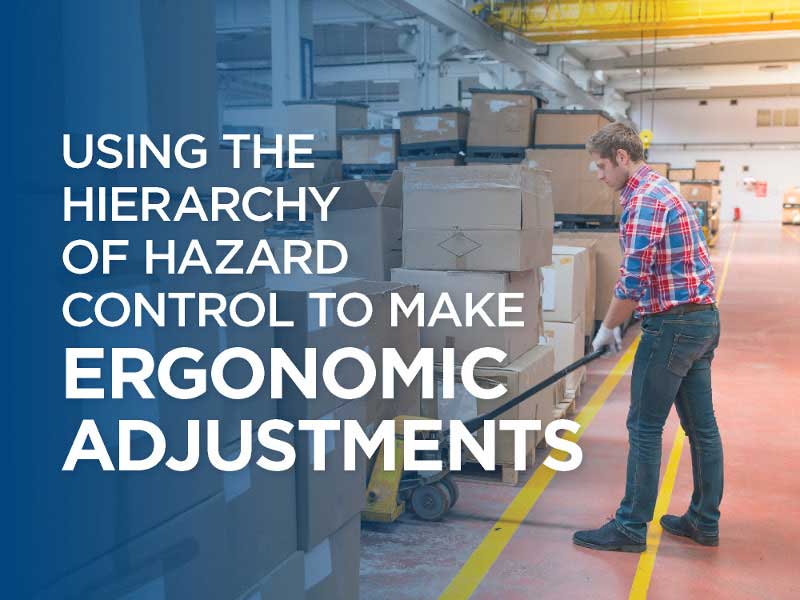 As you work to keep your employees safe on the job, EMC Program Development Engineer Neil Wysocki recommends using the hierarchy of hazard control to guide safety decisions. Using the hierarchy can help reduce injuries as well as help you find the best solutions to safety hazards.

Review the Hierarchy of Hazard Control

The most effective option is always at the top of the hierarchy list. If the top-level solutions aren’t feasible, move down the list until you find a fix. The end result may include options from several levels combined into one or more fixes. Follow this order as you seek solutions:

Neil shares some examples of how using the hierarchy of hazard control can decrease claims rates and keep workers safer.

An EMC-insured company had a contract to pick up recycling tubs in a large city. Workers had to bend down and pick up, then empty, plastic tubs at each household in the city. Each filled bin weighed 15 to 25 pounds, and workers were on the job eight hours a day.

The company faced escalating claims for overexertion, including many shoulder and back injuries. Management first attempted to provide better training on lifting, but with such repetitive tasks, injuries were ongoing, and training did not improve the number of claims.

At this point Neil became involved with the recycling company to explore options. Fortunately, the company had an older fleet of vehicles and replacing trucks was in the works. This became a perfect opportunity to eliminate the hazard causing the repetitive shoulder and back injuries.

Neil worked with the company to explore options. Managers were interested in a truck that lifted recycling carts with an arm operated by a joystick. After exploring this option with Neil, they recognized that although the joystick option would eliminate the need for employees to lift, this choice almost surely would lead to other ergonomic problems with workers’ hands and wrists.

A better choice was a truck that lifted recycling carts with an arm operated with the push of a button. This action is not nearly as stressful on the workers’ bodies as the joystick model.

The truck update was just one part of the solution. The company changed routes to reduce stress on workers, increased the level of engagement with workers and increased pay to reduce turnover. With this combination of actions, this company reduced its experience modification factor from the highest Neil had ever seen in any company to just over 1, which is an average score.

This EMC-insured company melts plastic (milk jugs and other reclaimed materials) and forms new products such as benches and decking. Workers inject plastic into molds, and then must close the molds which were heavy and difficult to seal.

The original task involved several workers swinging heavy rubber mallets to hammer molds closed, but this process resulted in numerous injuries, including mallet strikes and shoulder injuries from the powerful force needed to close the lids.

Neil worked with the company managers and used the hierarchy of hazard control to develop a better way. By changing the mold lid slightly, it was possible to use a hydraulic lift to close it, eliminating the need for workers to swing the mallets.

The moral of these scenarios, Neil says, is to choose the right controls to solve ergonomic problems. It may take just one change, such as the lid modification, or it may involve several changes, as with the recycling company.

The hierarchy isn’t limited to manufacturing or transportation-related companies. In fact, some of the biggest ergonomic problems are found in office settings. Reviewing workstations, including setup for keyboards, chairs and monitors, is an effective way to eliminate injuries.

It’s easy to be stymied by what may be causing the injuries and where on the hierarchy you’ll find a fix that works. That’s where EMC’s ergonomic specialists can come to your aid.

“If you are experiencing a large number of claims, that might be a reason to get in touch with us,” Neil says, “or if you are considering replacing expensive equipment or tools, you might also want to get advice to be sure the new components will be ergonomically helpful in keeping employees safe. You don’t want to invest in something that causes back, shoulder, wrist or knee issues.”

In addition, Neil suggests reviewing this OSHA ergonomics site for more information on the hierarchy of hazard control and ergonomics.

Get preferred pricing on drug and alcohol with CJ Cooper.