Evidence Spoliation: What Is It and How Could It Affect Your Business? 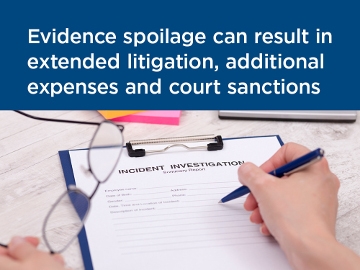 In these litigious times, organizational leadership should understand company policies, management and employee actions can lead to lawsuits.* Failure to preserve evidence of an accident or potential claim can also put companies at risk if the accident leads to a lawsuit.

Evidence spoilage is the intentional or negligent misplacing, losing, tampering or destroying of items so they cannot be used as evidence in a lawsuit. Such actions can result in extended litigation, additional expenses and court sanctions.

Could This Happen at Your Workplace?

The following is a scenario involving a workers’ compensation claim and subsequent litigation. While reading, consider if a similar scenario could ever play out in your workplace.

Warehouse ABC hired a temporary worker to assist with tasks around the workplace, including recharging and replacing equipment batteries. While working with a battery and its charger, the worker was blinded by discharged acid.

An independent insurance adjustor investigated the accident and, at the inquiry’s conclusion, notified the warehouse that materials and equipment involved in the accident could be destroyed. Warehouse management got rid of the battery, the charger and other items in the work area sprayed by the acid. They did not preserve the video feed from the surveillance camera covering the work area, even though it recorded the accident.

Later, the blinded worker took legal action, claiming that the charger or the battery was defective. The problem? The items were no longer available to offer proof either way, and the video evidence had been deleted.

While states vary in how they treat evidence that is no longer available during a lawsuit, generally there are consequences for not holding onto or producing evidence that was known to exist. A common response from the courts is that by getting rid of the potential evidence, the defendant could be perceived as hiding a known error or negligent action. In this case, the court may treat missing evidence as favorable to the plaintiff.

In this case, the blinded worker won a judgment against Warehouse ABC for negligence. The insurance carrier also had to contribute money to the settlement as punishment for negligently destroying the evidence. This result would vary by state.

What to Do After an Accident

Preserving evidence from any incident is the best way to prevent a spoliation allegation. If you receive correspondence from a potential claimant, you should preserve any evidence relating to the event. Sometimes that communication won’t arrive for a while after an injury or accident. It’s generally wise to hang on to evidence that may give rise to a claim.

Employees may inadvertently destroy evidence because they do not understand their responsibilities in saving documentation and evidence. Establishing a written policy and providing employee training related to incident documentation can help retain evidence from an accident.

Your insurance company and legal counsel can help you set policies and provide training details. These experts can also help you determine what to hold on to and for how long. Make sure to consult them as soon as possible after an accident occurs. Seek guidance from them about your state’s laws on retaining evidence and ask for assistance in developing and following best practices. For example, some states have a statute of limitations as short as one year, while others require you to hold on to potential evidence for six years.

The digital age has expanded items considered as evidence from equipment involved and employee medical records to surveillance videos, cellphone recordings, text messages and more. Use the following items as a starting point for your own list of what is considered evidence:

And finally, a few words of wisdom from EMC: “When in doubt, don’t throw it out.”

*Note: The information shared here is for educational purposes only and should not be considered legal advice. Consult with your legal counsel for more information and assistance.