Will Your Eyewash Station Be Ready When It’s Needed? 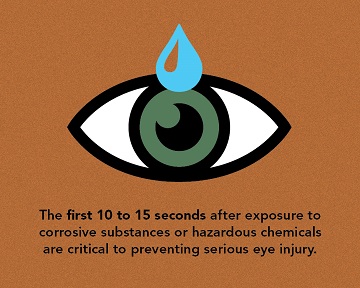 Count to 15. That’s how much time a worker who suffers a chemical burn to the eyes has to locate an eyewash station. The first 10 to 15 seconds after exposure to corrosive substances or hazardous chemicals are critical to preventing serious eye injury. That’s why the Occupational Safety and Health Administration (OSHA) requires eyewash stations in workplaces where corrosive chemicals are used. Meeting the OSHA requirement is only the first step in reducing the severity of eye injuries resulting from chemical splashes. Testing and maintaining those stations is critical to an effective and comprehensive loss control program.

A Maintenance Checklist for Eyewash Stations

Too often, companies install eyewash stations to comply with OSHA requirements and then forget about them. But you never know when that eyewash station will be called into action. Weekly inspections are the only way to make certain the eyewash stations are working properly. The American National Standards Institute (ANSI) recommends you check the following on a weekly basis:

In addition to these ANSI recommendations, EMC suggests adding the following to your weekly checklist:

A Word of Warning About Eyewash Bottles

The main purpose of eyewash bottles is to supply immediate flushing of the eyes until an emergency eyewash station can be reached. Eyewash bottles are not to be used as the only method for employees to flush their eyes for the following reasons:

All employees who may be exposed to corrosive chemicals should be trained on the location and operation of eyewash stations. Eyewash training should cover at least the following information:

EMC recommends the following resources for additional information about the testing and maintenance of eyewash stations: