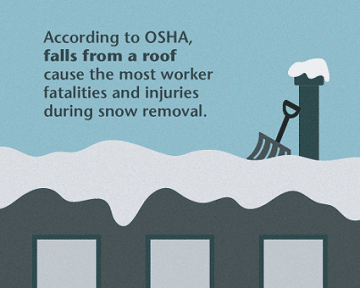 Working on rooftops is dangerous, but add snow and ice and the risk of a fall increases even more. The Occupational Safety & Health Administration (OSHA) reports that falls from a roof cause the most worker fatalities and injuries during snow removal. Last winter, at least six workers fell through skylights while removing snow from roofs during a particularly severe winter storm in New England. This prompted Ted Fitzgerald, regional director for public safety of the U.S. Department of Labor, to urge employers to issue precautions before sending workers on roofs.

With winter in full swing and snow beginning to pile up on roofs, it’s time to review some of those precautions:

Removing snow from roofs may help prevent structural problems or potential roof collapses, but it creates a new set of risks. Don’t be a statistic this winter.